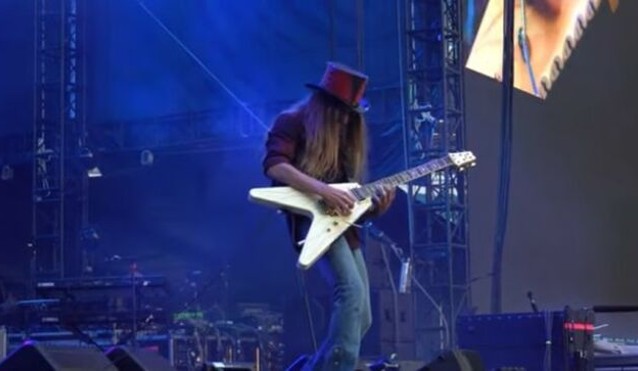 You can now check out fan-filmed video footage of POISON guitarist C.C. DeVille tearing through Eddie Van Halen’s “Eruption” below.

The solo took place during DeVille’s mid-set guitar feature at the Miami Gardens, Florida concert of “The Stadium Tour” on June 18 at Hard Rock Stadium.

POISON‘s North American run with DEF LEPPARD, MÖTLEY CRÜE and JOAN JETT & THE BLACKHEARTS was initially supposed to launch in 2020 and then was later bumped up to 2021 and then finally to 2022.

“The Stadium Tour” will wrap up on September 9 in Las Vegas, Nevada.

POISON‘s last studio album to feature new material was 2002’s “Hollyweird” which was followed by a covers record, “Poison’d“, in 2007.