HALESTORM frontwoman Lzzy Hale recently sat down backstage with Scott Penfold from Loaded Radio to discuss her recent tour with LITA FORD and DOROTHY, the future of the band and a new covers EP expected in the days ahead.

HALESTORM just wrapped up a North American Fall tour with LITA FORD and DOROTHY and are expected to release a new EP of cover songs in the days ahead.  This would mark the band’s third EP of cover songs from artists who influenced them, following 2011’s Reanimate: The Covers EP and 2013’s Reanimate 2: The Covers EP.  Lzzy did not reveal which bands HALESTORM covers on the new effort, however she does hint at one of the songs being a cover of a “thrash metal” act from “back when they still had long hair”.

Lzzy also discusses plans for a follow-up to 2015’s “Into The Wildlife”, a return to a familiar sound for the band and performing on-stage with LITA FORD among many other notable topics. 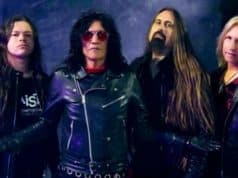