Loaded Radio’s Scott Penfold recently attended the ‘Return Of The Dreads’ tour which features Rob Zombie and Korn sharing headlining duties on one of the heaviest treks of the summer.  The tour also features In This Moment who for whatever unfortunate circumstances were unable to make it across the border into Toronto, Canada prior to the show, leading them to cancel their T.O. appearance.

Before the show Scott Penfold sat down backstage with Welch to discuss all things Korn, including their upcoming follow-up to 2014’s “The Paradigm Shift” , titled “The Serenity Of Suffering”.

The album was produced by Nick Raskulinecz and arrives on October 21 via RoadRunner.

The album is also a return to a much ‘heavier’ sounding Korn, bringing the Bakersfield, California band back to their earlier material’s blistering crunch and intense vocals courtesy of frontman Jonathan Davis. 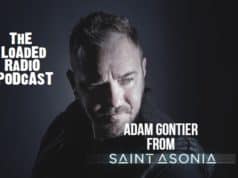 Podcast: SAINT ASONIA’s ADAM GONTIER Has ‘No Regrets’ Over His Past With THREE DAYS GRACE