KING’S X has had to cancel its European tour this fall due to “an unforeseen medical issue” with guitarist Ty Tabor.

Earlier today (Friday, July 8), Ty released the following statement via social media: “Hello everyone. I recently went in for some medical tests and discovered that I have an illness requiring vigilant monitoring. As a result, I will need to remain in the U.S. while following medical advice and potential treatment.

“I know this is a disappointment for those who have waited so long for our European shows. I am sorry for this unavoidable setback.

“I want everyone to know that my prognosis is good. We plan to keep doing shows in the U.S. so I can remain close to home and take less risks while dealing with this change in life.

“Thanks so much for all of your love and support.”

KING’S X did note however that Ty’s illness doesn’t affect the three shows the band is scheduled to play in July, as they will be the last concerts before his treatments.

KING’S X will release its 13th studio album, “Three Sides Of One“, on September 2. The LP’s heavy first single, “Let It Rain“, was made available last month. 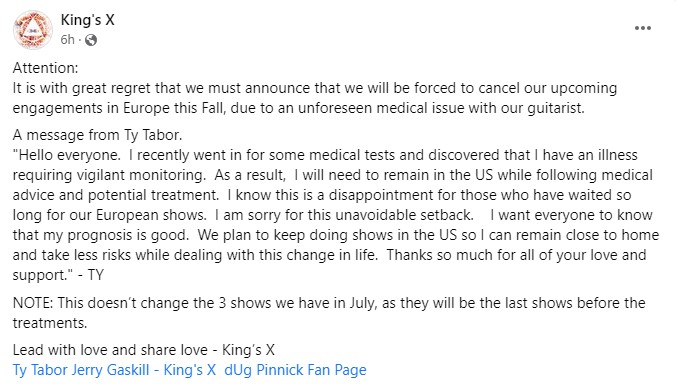