Both SLIPKNOT and MACHINE GUN KELLY performed at Riot Fest over the weekend, acting as headliners on the fourth day of the massive annual Chicago festival. WHile onstage, it seems MGK had a few words for his co-headlining act, saying he was glad to not be a 50-year-old onstage wearing a mask.

Just prior to going into his song “Jawbreaker,” MGK took his shot at SLIPKNOT, saying: “Hey, you wanna know what I’m really happy that I’m not doing? Being 50 years old wearing a fucking weird mask on a fucking stage. Fucking shit. So anyway, what’s everyone’s favorite candy? Reese’s Pieces?”

MGK’s shot at the band could very well be a reaction to an interview SLIPKNOT frontman Corey Taylor did earlier this yea with Cutter’s Rockcast, where he said: “The [young artists] that really frustrate me are the ones that they take something that’s been around forever and then just basically rework it and call it new — even though it’s completely derivative. You know the band they’re ripping off — they’re not even trying to rip off a bunch of bands; they’re ripping off one band. But the younger generation picks them up and says, ‘This is our blah blah blah,’ because they’re tired of old people telling them that the music that came before them was better. And I don’t know who’s right, but I know both are wrong, because we should be encouraging everything.”

Taylor continued, “I’m just as bad. I’m the worst old fogey dude shaking his cane ever. And I hate everything. I hate all new rock for the most part. I [hate] the artists who failed in one genre and decided to go rock — and I think he knows who he is. But that’s another story.”

SLIPKNOT are set to commence their U.S. tour with KILLSWITCH ENGAGE, FEVER 333 and CODE ORANGE later this month.

kells making fun of slipknot and then immediately transitioning into “so anyway what’s your favorite candy, reeses pieces?” was fucking hilarious ???? @machinegunkelly pic.twitter.com/xxQDya5u7l

STRYPER Releases The New Single ‘Rise To The Call’ 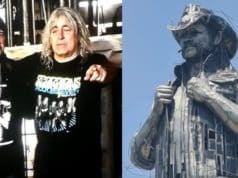