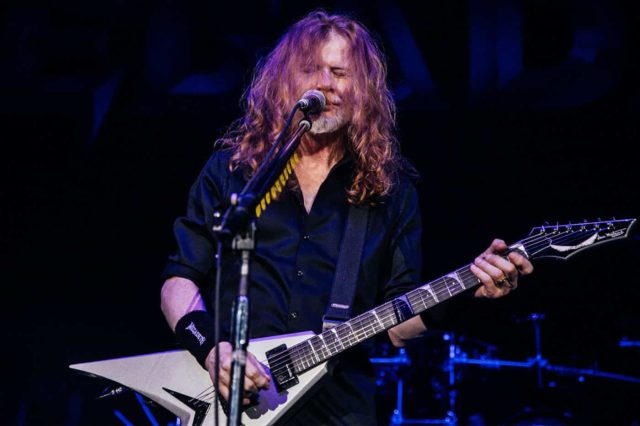 Dave Mustaine recently spoke with Detroit radio station WRIF and revealed that MEGADETH recently recorded a cover of a JUDAS PRIEST song “for an Amazon project that they asked us to do.” Regarding how MEGADETH approached recording the track, Mustaine said: “We went and listened to the song and charted out the performance. And going into that kind of micromanaging of the song, that minutiae production, we started to see a lot of things in the song where it seemed like there was no guide for the song. So we did everything the way that we do our recordings. And I believe it got a little more straightforward with the riffing and everything.”

MEGADETH‘s new album, “The Sick, The Dying… And The Dead!“, will arrive on September 2 via UMe. Featuring twelve new tracks, the follow-up to 2016’s “Dystopia” will be made available on CD, vinyl, and cassette, as well as digitally through all online partners. There will also be a limited deluxe edition 2LP, 12-track album pressed on 180g black vinyl housed in a numbered gatefold jacket with a 12×24 lyrics/credits insert, a lenticular vinyl lithograph and a bonus seven-inch featuring “We’ll Be Back” and the unreleased B-side “The Conjuring (Live)“. The limited deluxe edition can only be purchased via MEGADETH‘s official online store, through Sound Of Vinyl and uDiscover.

“The Sick, The Dying… And The Dead!” features a cover of DEAD KENNEDYS‘ “Police Truck” and Sammy Hagar’s “This Planet’s On Fire“, the latter of which includes vocals from Hagar himself.