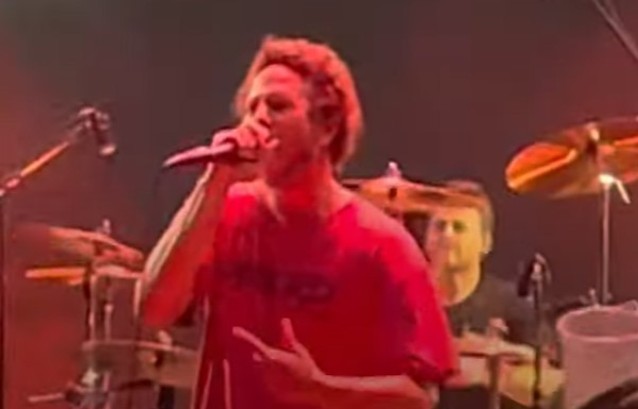 “Before I review for you the story of the 1st image, I want you to know that I am posting this today because I went to see my good friend Zack (with his torn ACL) perform last night at Madison Square Garden, one of the most hallowed venues in the modern world. RATM sold out FIVE nights. Even having to sit during the performance Zack De La Rocha showed the world what they had been missing in all the years he had been away from this incredible group of musicians. Zack “brought it” like few other ever have or ever could. Integrity, and heart, the touchstones of the most important and greatest. I had a great fucking time and was going off like a spoiled child up in front of the barricades because that’s how I’m used to it, being close and feeling it and letting it go through and move me.

“I was inspired! Even used my iPhone to a make a few shots & video clips, I’ll add them here when you swipe left. I think I may even go back with some film and shoot OG style tonight, problem is the size of the venue and stage, for me, takes away the intimacy of closeness I usually go for, and the inconsistent lighting can be more than challenging when you go all analog/manual like I do. Maybe one day I’ll figure out how to use one of those digital cameras 🤷🏽‍♂️

“So back to the story of my fave RATM image i made.

“My old friend, and drummer for Suicidal Tendencies, Beastie Boys, among others, Amery “AWOL” Smith was working with RATM and invited me to come down and meet them during a 3 night stint at the world famous Roseland Ballroom. i went down the first night just to see 👀 and hear👂🏽them… of course i was blown away and came back the next night and made some photographs. By this time i had already decided i was not generally using a flash any longer so there are risks involved concerning lighting, but i still had fun being on stage with them and i made this one great image. I love it and it’s also in my book “THE IDEALIST – In My Eyes 25 years” it’s a book of my aesthetic, art and politics.”

RAGE AGAINST THE MACHINE have had to cancel their European/UK tour due to Zack’s injury as well.  The band released the following statement via social media: “Per medical guidance, Zack de la Rocha has been advised that the August and September 2022 UK and European leg of the RAGE AGAINST THE MACHINE tour cannot proceed. It is with great disappointment that we announce this cancellation.

“RAGE AGAINST THE MACHINE will be finishing their run at Madison Square Garden on August 11, 12 & 14 and then Zack must return home for rest and rehabilitation. The flights, travel time, and rigorous schedule in the UK and Europe are simply too much of a risk for a complete recovery.

“We are so sorry to all of our fans who have waited years to see us and hope to RAGE again soon.

“Please contact your point of purchase for refunds to any headline shows.”

Zack reportedly injured his leg four songs into the band’s set at Chicago’s United Center on July 11, during the band’s performance of the song “Bullet In The Head“.