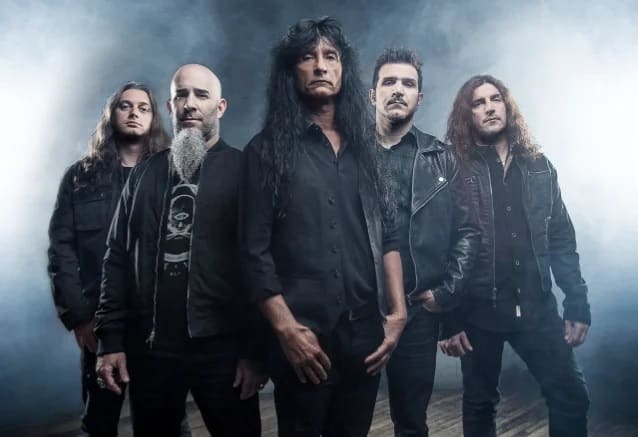 ANTHRAX guitarist Scott Ian recently spoke to Kyle Meredith about the band’s upcoming plans, including a new album from the thrash giants.

Scott said (as transcribed by BLABBERMOUTH.NET): “We didn’t get to tour [for our actual 40th anniversary in 2021], so we’re doing the 40th-anniversary tour in our 41st year. [Laughs] Obviously, we couldn’t go out last year and do it when we wanted to, so we’ve got this summer run coming up with BLACK LABEL [SOCIETY] and HATEBREED. And we’re calling that part of our 40th anniversary. We’ve got 40th-anniversary dates in Europe after that, in the fall. And who knows? I like to think this U.S. run with BLACK LABEL is gonna do pretty well, and maybe we get to do a second run of those dates at some point early next year. And then I’m sure next year at some point there should be a [new ANTHRAX] record, depending on when we get in the studio.

“So, yeah, it’s all starting to ramp up again,” he continued. “Fingers crossed it all doesn’t get thrown in the garbage. But I’m being very optimistic that things are moving forward and everyone can go back to work — meaning we get to go play shows again. And I’m very excited about that.”

As previously reported, ANTHRAX and BLACK LABEL SOCIETY will co-headline a 24-date North American tour this summer. The five-week run commences Tuesday, July 26 at Van Buren in Phoenix, Arizona and wraps up on Sunday, August 28 at the Fillmore in Philadelphia, Pennsylvania. HATEBREED, celebrating the 20th anniversary of the “Perseverance” album, will be in the support role.

Scott is currently on a promotion run for “Get Off”, the new album from his rock supergroup MOTOR SISTER, which also features Jim Wilson (MOTHER SUPERIOR), Pearl Aday (Scott’s wife and daughter of late actor/musician Meat Loaf), Joey Vera (ARMORED SAINT, FATES WARNING) and John Tempesta (THE CULT). Their album dropped on May 6 via Metal Blade Records.